Divorce and Going to the Movies IV

Published by TID Admin on 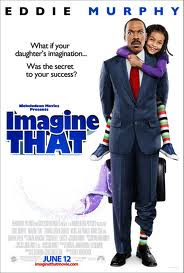 Seeing Eddie Murphy on the screen can’t but leave you with a smile. He’s bigger than life. He generates charisma, and he has a self-knowing warmth that extends from his days on SNL right through until Imagine That, his latest small masterpiece.

This is a movie about an everyday man. He’s that father who’s preoccupied with his job, the man who worked so hard to rise in the company, but he’s also the man who had a wife who couldn’t deal with it anymore so she left him. The problem is that he has a special young daughter named Olivia. She needs him, but Eddie Murphy will soon discover that he needs her more.

In this movie, Eddie Murphy is overly involved in his career. He’s a financial advisor who discovers that his daughter has predictive powers about stocks.

Does this draw him closer? Yes, of course. Is it for right reasons? No. He gets closer to Olivia because he wants to win at the game of money. This movie is a set up for the great drama that working parents have during a divorce. “I’m working for you,” but a child knows that he’s working for himself.

Imagine That deliciously documents how Eddie Murphy negotiates with his daughter, plays with his daughter, and finds the answers to the future. In doing this, Eddie Murphy realizes that the goal he really is searching for is in Olivia’s heart. This is a movie that every father and daughter should see together. I saw Imagine That with my 7 year old daughter to our mutual delight.

The Intelligent Divorce Program was designed by

The The Family Stabilization Course

The Intelligent Divorce Program was designed by Dr. Mark Banschick, a retired expert witness in custody disputes. His goal is to help parents, healthcare providers, clergy, and attorneys, navigate the hazards inherent in divorce.

Leaving Pain Behind and Moving On

[et_pb_section admin_label=”section”][et_pb_row admin_label=”row”][et_pb_column type=”4_4″][et_pb_text admin_label=”Text”] A Guest Blog by Heather Edwards. Lingering resentment from things that have gone wrong is hard to shake. Whether it’s the result of a bad break up or a job loss, it’s Read more…

Most people know something about death and dying thanks to Elizabeth Kubler-Ross and others. We know about the stages of grief, including denial, anger, depression and acceptance. We know about guilt and that deep feeling of loss. Read more…

The Mind of a Shopaholic: Oniomania

Oniomania is a strange name for a common problem: Shopaholism Here’s Dr. Hindie Klein’s take on it. The Mind of a Shopaholic: Some people shop themselves into an addiction. An alcoholic can give up booze, a gambler Read more…