Divorce and Going to the Movies III

Published by TID Admin on 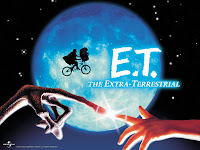 Steven Spielberg’s classic film pictures a boy who has experienced loss. Where is the father in this story? It is reported that the story comes from Mr. Spielberg’s own experience with an imaginary friend when he was young. ET turned out to be a great friend to have. Being from another planet, he was both strange and kind; somebody that only a young boy named Elliot gets to know, and when threatened, somebody that Elliot can save as he saves himself.

Children have pets, they have stuffed animals, and they have imaginary friends. They project onto these creatures, beings, things, elements of themselves. By loving your dog or your teddy bear, or even that wonderful figment of your imagination, you are, in a way, loving yourself, taking care of yourself, and never really being alone.

The great psychologist Winnicott tells us that a child’s blanket is a much greater thing than we may think. It is what he calls a transitional object. That blanket contains a sense of mother or father, a sense of being loved, and a sense of connection. So when the 5 year old is alone in her room with her teddy bear and the 7 year old still holds onto that tattered blanket under his pillow, they can feel settled; they are comforted deeply and in essence, they are not alone. We take this into elementary school and even middle school; in imaginary friends, and for others, in books, movies and poetry.

Yes, Mr. Spielberg touches great truths inside, and like an artist of the first rate, he paints it with a picture that’s external; a being from a far away planet. But we know – we parents, students, psychologists – we know that what he’s really pointing to are not the stars, but a warm place deep in our hearts where we feel good.

The Intelligent Divorce Program was designed by

The The Family Stabilization Course

The Intelligent Divorce Program was designed by Dr. Mark Banschick, a retired expert witness in custody disputes. His goal is to help parents, healthcare providers, clergy, and attorneys, navigate the hazards inherent in divorce.

Leaving Pain Behind and Moving On

[et_pb_section admin_label=”section”][et_pb_row admin_label=”row”][et_pb_column type=”4_4″][et_pb_text admin_label=”Text”] A Guest Blog by Heather Edwards. Lingering resentment from things that have gone wrong is hard to shake. Whether it’s the result of a bad break up or a job loss, it’s Read more…

Most people know something about death and dying thanks to Elizabeth Kubler-Ross and others. We know about the stages of grief, including denial, anger, depression and acceptance. We know about guilt and that deep feeling of loss. Read more…

The Mind of a Shopaholic: Oniomania

Oniomania is a strange name for a common problem: Shopaholism Here’s Dr. Hindie Klein’s take on it. The Mind of a Shopaholic: Some people shop themselves into an addiction. An alcoholic can give up booze, a gambler Read more…